It feels like the adventure has really started now.
We’ve made the big hop to Munich and successfully managed to get ourselves onto the train to Dobbiaco in Italy, the starting point for our walk. Rod was temporarily distracted at the Munich airport where he introduced himself to Jessica Fox, Bronze medalist in kayaking at Rio Olympics. He of course asked for a photo. What a sporting groupie!
I accidentally had the forethought to book us first class tickets on the train which entitled us to wait in the Munich Haufbanhoff catered Lounge for the four hours after the plane landed. Very civilized. I’m amazed actually. I bought the train tickets on the German DB website and everything was written in German. Also the last leg of the journey was on an Italian regional train where it wasn’t possible to buy the tickets in advance. Even the two connections that only allowed 6 minutes to change trains worked out!
Germany is very green and the last blooms of summer abound. I made the mistake of commenting to Rod within earshot of a German woman as we came in from the airport that the countryside looked a lot like the UK. She firmly disputed this thought and only pleading my Antipodean ignorance got me out of that one. We passed a couple of breweries on the route out of the Bavarian region and all seemed to be flat out preparing for the upcoming Oktoberfest.
Within 20 minutes of leaving Munich station we were amongst the iconic Bavarian villages with their distinctive barns and church steeples.

The scenery through the alps to reach Dobbiaco was spectacular! The town itself is super expensive and alive with summer holiday makers. Looks like it is huge for skiing too in winter. Only one more sleep now. 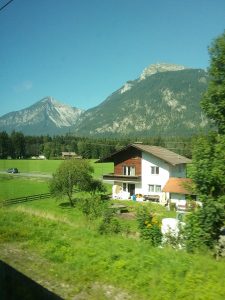 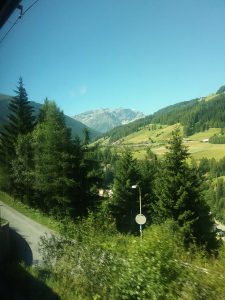 This entry was posted in Adventures Italy 2016. Bookmark the permalink.